The minutes are slipping away

In George Monbiot’s excellent article published today (Wednesday 12th August 2020) he exposes the shocking regulatory failure that has led many of our rivers to lose their hard-won gains in terms of pollution over the last few decades.

In that article Monbiot states that: “As an agricultural contractor explained to the Welsh government, some farmers are deliberately spreading muck before high rainfall, so that it washes off their fields and into the rivers. A farm adviser told the same inquiry that only 1% of farm slurry stores in Wales meet the regulations.”

To substantiate those claims, he links to a blog post I wrote for Fly Fishing & Fly Tying Magazine, which in turn quoted extensively from the November 2019 minutes of the Wales Land Management Forum’s subgroup on agricultural pollution, hosted by Natural Resources Wales. My blog post can be found here, which links to the minutes in question which can be found here (scroll down).

But note that subsequent minutes are no longer available directly - we are asked to email and request to see minutes from “December meeting to date”. Here is a screenshot taken on the morning of 12th August: 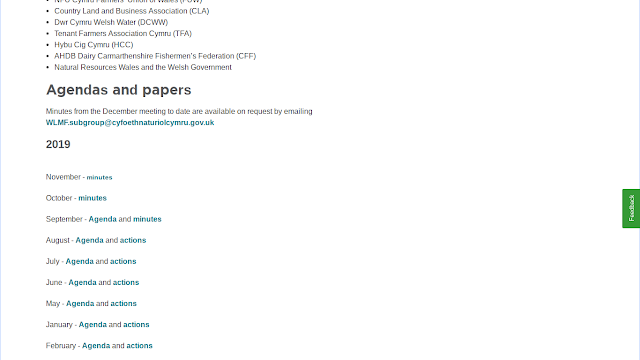 There is a story behind those minutes:
I was writing a few stories about the much anticipated new farming regulations promised by the Welsh Government which should have been published in January 2020, but were finally published in April 2020. (You can read about that in my Fly Fishing & Fly Tying blog post which can be found here.)

The role of the sub group on agricultural pollution is to take evidence and feed that into policy, so I was interested to see minutes from their meetings. NRW was slow to publish those October and November 2019 minutes - which, as it turned out, contained the testimony George Monbiot refers to in his article. In fact, they were so slow that I submitted a Freedom of Information request to see the minutes, and they were finally published by NRW in May 2020 - that is 6 months after the meeting happened.

I have been waiting for subsequent minutes to be published, but now I find out I have to email for permission to see them. I emailed as requested on 10th August, and got the following auto-reply:

“*** Thank you for your email. Currently we do not have a secretariat for the Wales Land Management Forum but a member of staff from NRW will respond to your email in due course ***


So far I have had no further response. I emailed the NRW press team this morning informing them I was going to write this blog post and asking them for an explanation as to why they are no longer publishing those minutes but are asking people to request them. This is to request to see minutes for meetings that happened almost 9 months ago now. So far I have had no response.

I know this is geeky stuff and I have probably lost most of you already. But consider this: I write a piece for a specialist magazine, quoting extensively from minutes published by a public body and at the end of the piece I link to those source minutes. Further up the food chain, a higher profile writer like George Mobiot writes a ‘state of the nation’s rivers’ piece for a national newspaper and shooting from the hip mine is one of many sources he works from and links to. Anybody interested can follow the trail from Monbiot, to (in this case) me, to the source minutes published by NRW. They no longer can.

In terms of public discourse, I guess you either think that matters or you don’t. I do.