This is how ladybirds die


This might be something else to worry about in terms of a datapoint on the longer term climate trend but as weather goes I think it is pretty near damn perfect. Mid September and in parts of the UK temperatures are set to top 30 degrees this week in a clean heat but this last few days the mornings have started to move in the autumn. So we have got this cool, early day chill, a heavy covering of dew and the dog is wired with scent as we walk onto the common land.

Slime on the cobbled hill dangerous under boot, mud, the metal rainbow of an oily film on the puddles around the drainage channel that enters the river at the bottom of the lane. Then a brush through wet stands of hogweed and willowherb and skeletal butterbur leaves, an unfamiliar feeling of cold against the squint of the tinfoil sun.

Turning it bronze. It is the change, the transition, that comes always suddenly as a dawning shock.

Pause at the goat willow, its old trunk split into a perfect seat and every time I pass I see a memory of my friend’s two small children sitting in it, exhilarated, off the ground. Over the brambles and beyond the hawthorn, into that sun, a white mist rises in shreds off my trout river.

But that sun and this dew. The spiders’ webs. The water has traced and the sun picked out a myriad of webs all over this field, I never knew there were so many spiders, their delicate architecture displayed and strung between the spines of creeping thistles, the most beautiful traps and catching the papus of the thistle down which brings them out in that sun even more. It is a mess but you begin to suspect as you grow older in that highly organised way that life is.

I look down at the dog who knows the smell of the river and that we are getting closer. She wants me to put her in and I probably will and she is excited as she looks back up at me because she knows that. If we should live in the moment, if I could choose any moment then this one would do.

But America is burning. There are 28 wildfires currently raging across California. This year wildfires have burned over 5 million acres of land across three states. 16,500 firefighters are engaged in trying to control them and so far 24 people have been killed in California alone and the death toll will rise. Death Valley made over 54 degrees recently, the highest temperature recorded on earth. The media is full of eerie orange skies over San Francisco and the sun is obliterated by thick, acrid smoke. They are breathing the worst air in the world right now.

Donald Trump, the President of the United States, blames forestry management for the fires. But there is consensus in the scientific community that the impact of the wildfire has been grossly exacerbated by man-made climate change.

Trump has just visited California. There is a tweet doing the rounds on social media linking to a piece of news video. The tweet transcribes - ‘Trump: “It’ll start getting cooler, you just watch.” California state official: “I wish science agreed with you.” Trump: “I don’t think science knows actually.”’

Meanwhile another hurricane is forming in the Gulf and is set to hit the Mississippi and Alabama coastlines. I’ve not looked up what Trump has to say about that.

On the edge of the field that in the sun is revealed to be so full of spiders’ webs it could in a narrative be described as one big spider’s web there is a ladybird at the top of a creeping thistle. The thistle head is in autumn now and the plume spilling out, and the ladybird is right at the very top.

That bright red ladybird looks incongruous up there, defiant, like a grasp of summer is trying to hold onto something it needs to let go. I am not sure if it is still alive. I put the lens on it and there are drops of dew on its wing case that form lenses themselves and through them the ladybird looks distant and shrivelled, like a husk. But that might be a trick of refraction and the light. I’m not sure. I nudge it with my fingernail and it doesn’t move.

I still don’t know whether it is dead or not. You can never be exactly sure with insects they can be tricksy creatures. Maybe the unseasonably hot sun that is coming will revive it, I don’t know, it’s not that important. 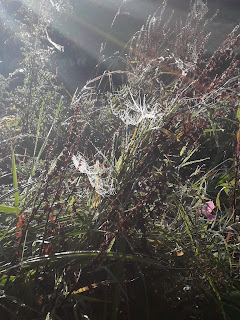