This is the first in a series of short notes about some of the flies you’re going to find in your tray when you start kick sampling the river. You don’t have to be starting to kick sample to read these notes: if you are here then it is a good bet you are interested in the river in some capacity and if you are, then hopefully you will enjoy reading about these flies whether you are going to go out and actively study them or not.

All the flies featured and photographed here I’ve collected myself and are from my local rivers, either the River Goyt or the River Sett in the Peak District, which is at the top end of the Mersey catchment,  just on the Derbyshire side of the Derbyshire - Cheshire border in England. The exception is the adult willow fly, photograph below, which has been kindly contributed by entomologist and angler Stuart Crofts.

First up is the stonefly, and in the photograph is the willow fly, one of the family of stoneflies that you’ll often hear called needle flies. When you see the adult winged fly, when it is resting on vegetation beside the stream, or on the wooden struts of the footbridge, you’ll see why; it is long and thin and the wings are rolled around the body so they have that delicate look of a needle.

The willow fly is the largest one of six species in the family we call needle flies and probably because it is that bit out on its own it is one of my favourites. You’ll see it in the air later on in the year, at the end of summer and going well into autumn. Stoneflies are easy to spot: they look like weak fliers, the blur of their two pairs of wings slow enough to discern, that bit out of sync. If they come near you try holding out your hand and the chances are they will crash into it and then walk slowly around your finger. If you are in the habit of carrying a hand lens around with you then this is a good time to use it. Have a real good look, the chances are it will stay still long enough for you to do so.

They seem so inept in the air you wonder how they manage to survive but don’t be fooled because stoneflies have been around for 250 million years or more so they must have got something right. They say that they never venture far from water because of their weak flying but up on the Kinder moors, near the headwaters, I’ve seen them some surprising distance from the streams which just goes to prove these animals never read the books they should do. Or that they have been blown there on the wind in that open landscape, over the peat and heather and gritstone scars, and are using those ancient instincts to try and find their way back to the water. On those weak wings.

So if you see a laboriously progressing fly near the river that looks like it has been filmed through an old pathe newsreel, then the chances are it will be a stonefly. If it is late in the turn of the year, and the yellowing leaves are starting to curl and fall on the water, the crack willow and the sycamore defining the streams in the river, the chances are it will be a willow fly too. Look carefully and you may see a small, cream-coloured blob at the tip of the fly’s abdomen - that is a ball of eggs and you may see her dipping down and depositing these in the surface of the water between the streams of leaves where they will drop down through the column to settle into the bed of the river to start the cycle again. Some of these times that may be the last thing she does as on her dip you’ll see a dimple of water come up beneath her and engulf her: that is a grayling most probably, or possibly a trout, coming up to claim a meal.

It is time to introduce you more formally. Stoneflies are from the order of insects called Plecoptera and the needle fly family is called Leuctridae. The particular nymph in the photograph is from the genus Leuctra, and the full name of this species is Leuctra geniculata. We know this because if you take out that hand lens you now carry around in your pocket, see those gnarly bits sticking out near the base on the antennae of the nymph? You won’t find those on any other stonefly here: find those and you know you’ve got yourself a Leuctra geniculata right there in your tray - or a willow fly nymph, if you prefer. 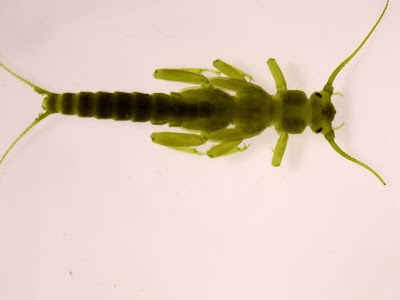 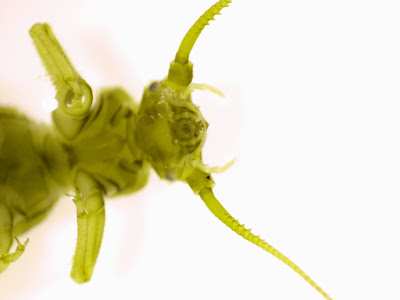 What matters more is how to tell a stonefly nymph from a mayfly nymph in your tray, for instance. This is the interesting bit because it can tell us something about the river and the place that you found it. It can tell us something about the quality of the water and the habitat of that particular river, and what else is likely to be living there even. It can tell us about the temperature and the altitude and the climate and how quickly it is changing maybe. Now that is useful information, the ability to perform that kind of detective work is the consequence of being able to assemble pieces of knowledge. That is something to strive for.

If you were going to pick out a stonefly in an identity parade the first thing you’d do is count the tails. If it has two tails, then the chances are it is a stonefly. This separates them from mayflies which tend to have three - but be careful you’ve not got a mayfly with a broken tail - it does happen, especially after the river bed has been kicked over by a pair of big, clumsy wellington boots. Kick sampling is a destructive process in itself and must be done respectfully.

So just to make sure you are not dealing with a mayfly with a broken tail it is best to do a second check: does it have any gills along the side of its abdomen? Mayflies do and they are easy to see. Two tails, no gills along the abdomen, you’ve got yourself a stonefly nymph.

The physical structure isn’t the only way to identify these nymphs. When you get a bit more experience you will notice that the different groups of insects you are trying to separate out all have their own way of moving.

As you look down into your tray you will have brought a fair bit of gravel and probably decaying leaves with your sample. As it settles the first signs of life you will see are probably the smaller mayfly nymphs, darting about the water. Unsurprisingly by now I hope, we call these agile darters.

The stoneflies are some of the last to appear, hiding beneath pieces of leaves and stones while their world settles around them. Then they may venture tentatively out and your attention will be drawn. When I sample the Kinder headwaters, the streams only a foot or so wide sometimes, everything is scaled down. I’ll use an old take-away tray, a small trowel instead of a wellington boot and an aquarium net. The samples tend to be ‘cleaner’ and there is a layer of fine gravel in the tray. This up here, with its clean, cool waters is stonefly heaven. I could watch the needle fly nymphs - the Leuctrids - all day. Unlike that awkward, clumsy flight in the air, here in this tray beneath my gaze they move beautifully, their slightly flattened bodies and long, sideways-sticking-out legs allowing them to hug the bottom and glide through and over and between the fine particles of gravel like mercury flow. This is them in their element, where they spend most of their lives, growing and shedding that hard shell of a skin multiple times before that brief, last transformation into the winged form when it leaves the water and splutters and coughs around, looking like it doesn’t know what it’s doing. Just for a few days this stage, to allow them to mate, deposit those eggs, then die. But here, in the water, now, hugging the stream bed they are perfectly formed for the function; this is where they belong and those 250 million year old fossils don’t seem such a mystery any more.

The willow fly was the first fly I tried to imitate as a fly fisher and tyer. It was the beginning of the grayling season in autumn and I’ll never forget the moment on the River Goyt down at Mousley Bottom that fly I had designed first worked and a grayling came up and took it and I felt the kind of exhilaration that only one who has managed to outsmart an animal with the brain the size of a pea will understand.

My vainglorious celebration was cut short a few days later when I read of the very same design in a book - someone had beaten me to it. It was an angler called Charles Cotton and he fished on the River Dove at Beresford Dale in the Peak District. The book where he had described my fly pattern was Izaak Walton’s ‘Compleat Angler’ and Cotton had published his section in 1676. So he had just pipped me to the post there then. But then I sat back and thought for a moment. I thought that both Walton and Cotton were first and foremost naturalists, observers of the river and the life in and around it, and if that was the tradition and company that inspired me then I was happy to be a part of that. More than that there is a continuity to it and there are those of us who think that is important.